Prior to my off the cuff stop in to the Jello museum in Le Roy, New York, I knew a few things about Jell-O. I knew, for instance, that Jell-O is a colloidal protein and that the protein chains require denaturation in hot water in order to reform as a semisolid colloidal suspension and that alcohol cannot be heated to an appropriate denaturing temperature without evaporation. WHAT?! O.K. To translate, you can’t make Jell-O shots with ALL alcohol. You have to use SOME water to dissolve the gelatin. This is the universe’s little way of making sure that my Jell-O shots aren’t TOO dangerous to be served at parties. Now, I make them in medical grade syringes, so they SEEM safe, but you can bet your sweet patooter that I have experimented for YEARS to find the maximum amount of booze I can squeeze into those puppies and still make the chemistry work.

I also knew that Jell-O makes me smile. I mean, honestly, it has SUGAR in it, it can turn a boring party RIDICULOUS, and it JIGGLES. If I had a personal crest, those three all caps words would be on it. Take note, ballad writers, put ’em in the ode. So, I knew some stuff, right? Well I could never have guessed at the weird fun I was yet to learn. . . .

Auspicious?  No, not really what I was expecting, either.  But then again, we’re not dealing with Disney here.

Jell-O was patented by a man named Pearle (Pearle Bixby Wait) late in the 19th Century. He was a carpenter and cough syrup manufacturer by trade (does this sound like the 1800’s version of Breaking Bad to anyone else?), but he and his wife experimented with a method of mixing powdered gelatin with sugar and fruit flavoring to make a dessert style food. Gelatin itself has been around since at least the 15th century but since it is actually made by boiling animal bone, bladders and hooves and has to be purified through a very lengthy and complicated process, it was typically a meat flavored food for the wealthy (aspic–also known as as-puke – oh, maybe that’s just me). When vegetarians you know don’t partake in your Jell-O Pretzel Dessert Casserole at the company potluck, now you know why. A little known fact is that Peter Cooper (the inventor of the first steam powered locomotive) patented the first powdered gelatin, but Pearle, well, he perfected it by adding sugar. 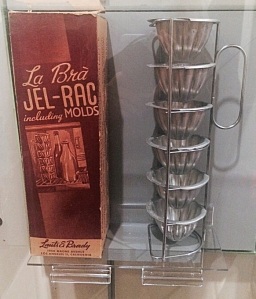 Why Daaaahling, what a lovely rack you have!  I mean, your Jell-O rack, of course.  🙂

The museum itself is, I am sorry to say, not all that comprehensive (maybe they are still reeling from having to remove so many exhibits spanning from, let’s say 1974 to 2011 when your and my favorite “Drug ’em, Love ’em, and Leave ’em” television star was the face of the entire product line) but it was an interesting romp. Jell-O was manufactured at the site from invention through 1964 and visitors can tour the infamous birthplace which shows the journey from hoof and bladder to dancing dessert, see historical marketing costumes, marvel at the kits used by traveling salesmen when Jell-O was sold door to door and store to store, and stare flabbergast at an enormous collection of Jell-O molds. After the museum, Jell-O enthusiasts can walk the “Jell-O Brick Road” to see the remaining Le Roy sites of historical Jell-O importance. 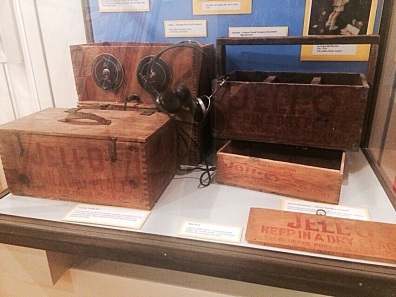 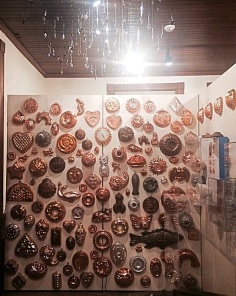 I was born the year that Bill Cosby was made the official spokesman for Jell-O, so I have never known another face, but I loved seeing advertisements starring Colonel Klink and the rest of the cast of Hogan’s Heroes, Carol Channing, and the stars of The Lucy Show in spectacular 1950’s form serving it up family style. Even Jack Benny, who wouldn’t stop his show for advertisements, was sponsored by Jell-O with hilarious feigned irritation at Don Wilson’s interjections. 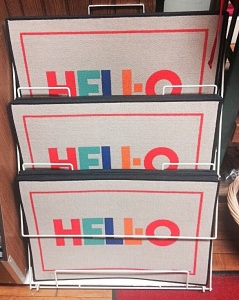 Do I like this doormat?  Yes.  Do I think  that a white doormat is a good idea?  Noooooooo.

My visit to the birthplace of Jell-O prompted further gelatin research and some hilarious pop culture references that I had forgotten came out to play–The Simpsons, SNL, MAD TV, and Mormons. I had forgotten the hilarious and strange Mormon-Jell-O connection. Apparently Utah consumes more Jell-O per capita than any other state and Jell-O is the official State Snack Food. If you are wondering whether you should choose state of residence based on best state snack food, give it up now. Apparently only Utah has such a designation.

I bought these citrusy shirts for my zesty kiddos.

Fun takeaways– Weirdest actively produced Jell-O flavor? Mixcheif Juice. What is that?! Weirdest discontinued Jell-O flavors (heretofore to be referred to as Jell-O Flops)? Italian Salad, Celery, Coffee, Seasoned Tomato, Maple Syrup, and Bubble Gum. Jell-O Brand does not condone either the making of Jell-O shots nor Jell-O wrestling as these activities tarnish the “family friendly” image of the company (*cough* Cosby *cough*). For the record, I personally condone both of these activities. With fervor.

Wait!  I thought that the DIDN’T condone Jell-O wrestling. . .

What's to say? I'm a chronic fun seeker and life marrow sucker. I live in an ancient brick house in a darling town with my perfect and tolerant husband, my two amazing teenagers (The Giant and The Ginger) and two blue Danes (Oliver and Periwinkle). A lover of obscure roadside attractions and museums of oddity, I travel, write, laugh, make friends, write letters, sometimes run, eat great food and drink good whiskey. I've never had a bad journey and every single day is my grandest adventure.
View all posts by peik →
This entry was posted in confessions of the Weird and Unashamed, Just Being Me, Uncategorized, Weird America and tagged Cross Country Drive, Jell-o Museum, Jell-o shots, roadside attractions, Travel, Travel New York, weird america. Bookmark the permalink.