The Run Playlist and My New Affair (Bad Words)

Alright. I’m saying it out loud. In writing. I. Was. Wrong.

I have MF’d the iTunes Genius (or lack thereof) and the “random” shuffle feature on my Big Brother Apple devices for years. I mean, NOBODY can design a playlist like me. Especially a running playlist (look at the modesty on Pam, people). I organize all music libraries by beats per minute, then by general mood, then genre, and then alphabetically. I can tell you, when a song comes on the radio, whether it is a seven minute mile or a ten minute mile tempo and practically anything in between (not any faster, because if you run faster than a 7 minute mile, I think you should die a painful Two the Hard Way/Playing with Fire death of a million terrible songs). I can write a playlist so that you grin hilariously through 26.2 miles of shit eating hell in the cold rain and make all other runners think you have eaten Gu laced with Ex. And someone else picking my music is my own private hell.

Today, I ventured outside. I’ve been limp d*cking my way through a half marathon training program on the treadmill I keep in a cupboard across from the guest room and, while I’ve been technically clocking the miles while I binge watch Arrow on Netflix (don’t start, you know that derpy is my kryptonite), I’ve been just that–technically clocking miles. 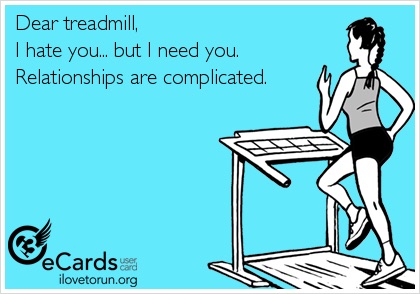 I’m hooking up with some of my favorite people on the planet in May to run together and I know that they’ve been actually mindfully training. And I’ve been a lurp, so I needed to get out and see what the old legs could do when faced with mud and, gulp, fresh air. I procrastinated for so long this morning–actually drove to the airport to get fingerprinted by TSA which was some award winning Heisman arming–that I finally had to grab my Shuffle, slip on some shoes and run out the door before I lost my nerve.

When I got to the Reservoir, I hit ‘play’ only to discover that I was not carrying my running Shuffle but a ‘travel’ Shuffle that I use to transport music and drown out people who have the nerve to sit next to me on airplanes. It’s fair to say that there were a few random curse-style flare ups as I skipped the first few songs trying to get into a groove and then, something happened, I pushed the tiny lever (c’mon Apple, that lever is as hard to operate as a frigid girl’s clit) to ‘shuffle’ and the most amazing thing happened–shuffle rocked my world.

I was hesitant to get excited at first, you know, like when your sibling is being TOO nice to you, you sort of just know something is up? During the first three songs I just tilted my head like the RCA Nipper–I was intrigued, amused, but reticent. But by the time I hit mile two, I knew that the son of a bitch was really working it for me. Years of silent treatment had made him WANT to impress me. Shuffle–that old so and so–was COURTING ME!!! I would have skipped and done a little Phoebe run (my typical celebration of an awesome run song), but I spied a hill on the horizon and I knew that our burgeoning relationship was about to be tested. It’s about here, on a typical playlist, where I would have put a giggle song–a tune that is just so randomly happy that you forget about the whiny bitch inside of you telling you to walk for a while, no one will notice. Truly, a ditty. I braced myself for the eventual disappointment–and the hill–and waved the fingers of my shootin’ hand over the device at my hip, prepared to pull the trigger in a high noon shootout of music veto, and then I heard it. John Lee Freaking Hooker. Three minutes of blues guitar and alto heaven. . . Boom Boom Boom Boom. . . My new boyfriend, Shuff, John Lee and I kicked that hills buttocks!

My run progressed with amazing and thoughtful surprises–jumping from the Dead Milkmen to The Pistol Annies, answering my laugh with some Kidney Thieves from the Queen of the Dead soundtrack and then soothing me into Spiderbait with a touch of AWOLNATION. Shuff threw me a little Hugo and a random Trey Songz then punctuated it with a smidge of Local H. Just when I thought it couldn’t get any more delightful, he threw OK Go covering the Muppet Show theme song at me and then pushed through a little Cake (because who doesn’t love Cake, right?) before Audioslaving me to the finish line. I gotta tell you, I was seriously considering giving Shuff a serious go at a relationship with me then I stepped off the trail, stopped my Garmin and started walking back to the car. . . and he played me a little Otis. Now, I know that if he asks me to leave my husband and join a cult, I’ll probably say, “yes.” I can NEVER resist a little Otis. And a giant bottle of ice water.

What's to say? I'm a chronic fun seeker and life marrow sucker. I live in an ancient brick house in a darling town with my perfect and tolerant husband, my two amazing teenagers (The Giant and The Ginger) and two blue Danes (Oliver and Periwinkle). A lover of obscure roadside attractions and museums of oddity, I travel, write, laugh, make friends, write letters, sometimes run, eat great food and drink good whiskey. I've never had a bad journey and every single day is my grandest adventure.
View all posts by peik →
This entry was posted in confessions of the Weird and Unashamed, Just Being Me, Run Pam Run, Uncategorized and tagged Half Marathon Training, Running, Running play list, Shuffle running songs. Bookmark the permalink.