My last day in Amsterdam started with an epic run. I wouldn’t say that the running itself was epic, so to speak, but the view? We crossed the street from our hotel to join the houseboats joyfully bobbing on the silent IJhaven Canal (did I mention that sometimes I wake up my husband and drag him running with me? bwaaaa ha ha) To our right? An eye catching pair of graceful white arches framing a bridge dotted with morning commuters on their bicycles. To our left? A modern, architecturally stunning pedestrian bridge crossing the canal with an almost lazy, low span. We turned right and jogged the canal dodging early morning smokers out walking their dogs then crossed the double arches bridge to the other side of the water. Passing through a series of sculptures that serve as foot bridges, we ran down to the pedestrian bridge, up and over to get back to our hotel in a giant, two mile loop of unsurpassed morning tranquility. Ahhhhhh.

Each little bridge over the canal inlets (4) was a unique piece of working art.

THIS is a run. When I get to run somewhere like this and I’m tired or my legs hurt, I think back to treadmill miles or miles run through stucco tacky in NV and I smile refreshed. 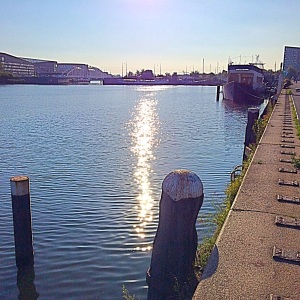 Good morning! Who wants to move to Amsterdam with me?

This vacation, we have let the boys sleep later than usual but the day before, the line to the Anne Frank House was more than six hours long. I had a running internal dialogue with myself on this subject. First, it was the weekend. People vacation on weekends, right? Also, it was late in the afternoon so unprepared people had obviously been stacking up for hours ruining my day. So, if I came back on Monday morning, bright and early, I would surely get to see the Anne Frank House. Second, I REEEEEEEEALLY wanted to see the Anne Frank House and I find that, if I keep a good attitude and have a little patience, I can usually get what I want. Third, did I mention that I really wanted to go?  And I’m a brat if I don’t get what I want.  Really miserable. So, I woke my kids up when I left for my run and told them that they needed to shit, shower, shave AND be packed and ready to leave by the time I came back from my run. When I got back with coffee, THEY WERE!! It was an Amsterdam miracle.

Despite our early start, when we arrived at the Anne Frank House, the line was six to ten people wide and it stretched from the door to the corner where there was a sign that said, “30 minutes from this point.” We turned the corner to jump into the rear of the line only to find that it stretched, ten people wide at its narrowest point, another city block. There was no way that we could wait, honestly, at this juncture, I could tell that it would be about three hours and that was all the time that we had before we had to get on the road, but I dejectedly walked the block to the end–just to see for myself. And it kept going. Another block, then another corner, then another 150 yards. Dream. Crushed.  My children, who have more than an inappropriately morbid collection of terrible Anne Frank factoids in their brains that can’t find a pair of socks that they are standing on, tried to lift my spirits by disparaging Anne.  Didn’t work.  The Giant even tried to hug me (Giant hugs are typically very healing in that “so awkward you can’t help but laugh” kind of way).  Didn’t keep me from throwing a ridiculous temper tantrum that landed all over Kevin (yet again, the reason why men aren’t lining up to steal me from him???).

Regrouping required some seriously delicious sandwiches on baguettes just as they were pulled out of the oven then filled with pesto, gorgeous prosciutto and fresh cheese. Appropriately sated, we went, instead, to the Gasson Diamond Cutting Factory to watch diamonds being cut and to learn about the different cuts and kinds of diamonds then to the Van Gough Museum.

Wow. I love Van Gough. I love that he knew from the start that he wanted to put art on its ear and he just started painting. When he discovered that other painters found him lacking, he didn’t have attitude about it, he went to Paris to learn to paint well THEN turned his nose up at the whole institution. I love that he wanted to create a haven for the most interesting painters on the planet and work together to make great art. I love how much he adored his brother and that he wrote to him almost every day. And, I love his work. This museum houses more Van Gough works than any other single place and it was lovely. Arranged historically from the beginning of his career to his last painting, the museum tells the story of his life, through his paint. 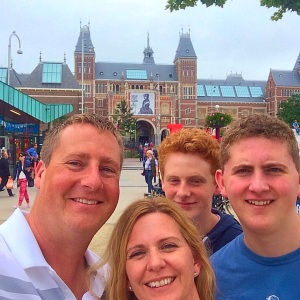 Us, in a big arty square full of museums. We had to pick one. It was torture. I need a month.

After lunch, we got in the car for another change of scenery. I would like to speak for a moment about the hilarity of listening to the bitch on the GPS say words like, “IJburglaan, Knooppunt, Utrecht and Maastricht” is the best revenge for all of the “lost” she has given me in the states. Laughing at HER expense? Priceless. Leaving the Netherlands was bittersweet. I feel kind of like Dutch is a language comprised mainly of sounds that other languages reserve for disgust. Think about a food you really hate. I mean something that the very sight of is repulsive to the point of flop sweat. Now think about putting it in your mouth. Euggh. Now put that noise into every word you say. THERE! You speak Dutch. Now, imagine that everyone around you is just making those sounds with various intonation and that they mean real words that you can’t undeerstand? There. You know what it’s like to be in Amsterdam. 🙂 Just kidding, they speak English (to your face).

Random Amsterdam picture about how cool they are. I kid about the language, but I really did dig this place.

What's to say? I'm a chronic fun seeker and life marrow sucker. I live in an ancient brick house in a darling town with my perfect and tolerant husband, my two amazing teenagers (The Giant and The Ginger) and two blue Danes (Oliver and Periwinkle). A lover of obscure roadside attractions and museums of oddity, I travel, write, laugh, make friends, write letters, sometimes run, eat great food and drink good whiskey. I've never had a bad journey and every single day is my grandest adventure.
View all posts by peik →
This entry was posted in Run Pam Run, Travel and tagged amsterdam travel, Anne Frank House, Funny GPS, Speak Dutch, Van Gough Museum. Bookmark the permalink.