This blog should be about Belgium, and it is, mostly, but it’s also about compromise. My kids wanted to come to Brussels. We’ve already been to Brussels. Not that I didn’t love it the first time, I did. It’s just that the list of things in this world that we haven’t seen is so much longer than the list of things that we have and I want to spend my free time moving items from list A to list B. My kids are at the age where list B is their comfort zone. Crap, they’ve ALWAYS been the age where list B is their comfort zone. “Let’s spend some time in Europe this summer!” is soundly met with eye rolling and “Can’t we juuuust stay hoooome?!” almost unanimously. We’ve been dragging them kicking and screaming pretty much the whole trip and WE’RE tired so, in an effort towards compromise, we worked Brussels–one of their favorite cities in the world–into this trip as kind of a “brain rest.” 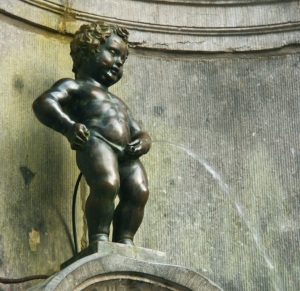 This is the symbol for the city of Brussels. And the smell.

Our hotel is a rubber ball bounce (I can’t use stone’s throw, because that’s too far and I’m trying out new units of measurement considering it is obvious that I cannot convert to metric) from the famous square pictured below. It is as fanciful in person as the photos, in fact, there’s a chance that the photos don’t do it justice. Having been here before made picking a hotel easier because we knew where all the cool stuff was.

The last time we were in Brussels, we accidentally arrived on a holiday–Ommegang Festival– a citywide renaissance festival. We had dumbly stumbled into the city and had no sooner sat down with our cold beers, chocolate smothered waffles and cokes to play poker in the square and people watch when the streets were shut down, filled with stands selling everything from renaissance weapons and costumes to wands and fun street food. Brussels is a city so steeped in romantic history that the city areas still fly the original colors showing the families or trade that they are associated with. Each area of town dresses in costume, dresses their horses and marches to the main square behind amazing and fanciful parade floats boasting marionettes representing their sector to have a good old fashioned party. All night. For days.

This time, we were sure to miss the festival, traveling as we were, at the end of July instead of the beginning. So picture our surprise when we woke the morning after our arrival to find that it was Belgium National Day. Imagine that the Fourth of July, New Years Eve in Times Square, and Mardi Gras (with those three, a threesome is possible, don’t be a judger) had a gayer drunker baby of a holiday with much better quality beer, lots of gourmet chocolate and no public restrooms after a public service announcement by the Surgeon General that smoking is actually GOOD for you and makes sex better. There. You’ve seen National Day in Brussels. On a normal day (Tuesday), the bars are open from six at night until six IN THE MORNING. Now, imagine that you like to sleep at night and you rented a room IN THE CENTER because you KNEW the city well enough to pick the best, most centrally located room. . . and even the Belgian children are out till the wee hours with their faces painted in the national colors and screaming at the tops of their lungs. I mean, it doesn’t even get dark until past eleven and fireworks are mandatory, yes? Sooooo. . . funny. We spent the day doing laundry and sitting in cafes drinking and playing cards. The people watching was beyond fantastic.

The friend who had recommended our favorite restaurant in Amsterdam is actually Belgian and we were heartbroken when her restaurant recommendation here was on holiday. For a month. As Americans, we forget that other countries understand the importance of a real holiday and that businesses will frequently close down for a month in the summer in order to take one. In this case, it was one of the biggest and most illustrious restaurants in the city of Brussels, closed for an entire month in the middle of tourist season. Crazy lovely. So we wandered the streets gawking at the food on strangers’ tables and reading menus in French until we found a place that appealed to all of us. Of course, we found a pastry shop to tide us over until that happened. Freaking French pastry. I’m going to have to give up carbs for a month when I get back.

Pots of mussels cooked in cream sauce with celery, onions and herbs, cold champagne, lamb chops, stoemph, crusty fresh bread and ice cold beer–the world’s best table. Let the meal settle over hilarious hands of Five Card Draw? Perfection. Later, we walked the streets and laughed at the carryings on then found a perfect table outside a cafe to play Texas Hold ‘Em and enjoy the view. 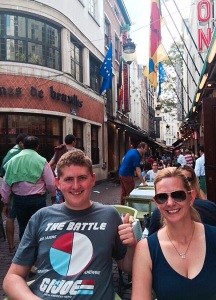 Best conversation of the day? When The Giant tried to psychoanalyze everyone’s poker style and describe them. “Dad” he said, “is an habitual folder, he never bluffs, he never bets a bad hand. Of course,” he grinned “now that I’ve said that, he’s going to bluff the next three hands. Mom never folds. She’ll play anything so you never know when she’s bluffing.” At this point, The Ginger pipes in, throwing his cards on the table, “Well, I’ll never GET a good hand so we’ll never know what kind of player I am and YOU (pointing to The Giant with his Coke glass) are a chronic folder. You never play a hand–folding before the betting even starts.”

“You mean that he has Chronic Foldulence?” I asked, giggling.

“It’s when the Foldulence is audible and everyone around you can HEAR the folding that it’s really disturbing.” laughed Kevin.

What's to say? I'm a chronic fun seeker and life marrow sucker. I live in an ancient brick house in a darling town with my perfect and tolerant husband, my two amazing teenagers (The Giant and The Ginger) and two blue Danes (Oliver and Periwinkle). A lover of obscure roadside attractions and museums of oddity, I travel, write, laugh, make friends, write letters, sometimes run, eat great food and drink good whiskey. I've never had a bad journey and every single day is my grandest adventure.
View all posts by peik →
This entry was posted in Teenagers - one eye roll from certain death, Travel and tagged brussels, travel with teen. Bookmark the permalink.